Success at the IPO 2012
I am very pleased to inform you all that our team has put up an excellent show at the International Philosophy Olympiad  2012 at Oslo, Norway. Nishith Khandwala has bagged a silver medal and Abhinav Menon a bronze. I am feeling extremely proud and content at this.
Heartiest congratulations to the boys and a kudos to all the participants who attended the training camp. I hereby take the opportunity to thank our guest lecturers Prof. Minal Katarnikar and Jerry Johnson whose valuable guidance made this possible. 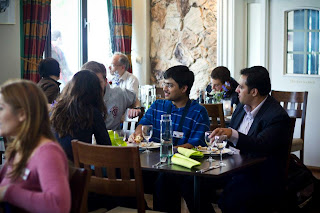 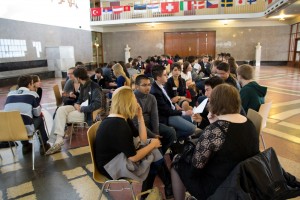 Looking forward to receive the team back home.
Posted by chitra_adkar 1 comment:

Hobbes on need of Government


Hereby it is manifest, that during the time men live without a common power to keep them all in awe, they are in that condition, which is called war; and such a war as is of every man, against every man. (Hobbes, Leviathan, Ch. XIII)

A) Each man follows his principles / ideals
B) Society consists of many men where
1) the ideals of two people are the same
2) they are different
3) they are in opposition
C) Men are not rational (either impulsive / not clear enough reasons / ignorance of other possibilities) hence not tolerant; hence believe in
ideological superiority
D) A + C + B2/B3: disharmony  / conflict since the only way to remove differences is through coercion
E) Common Power: Authority which poeple hold in awe
1) Fear of being harmed if you dont agree with the authority
2) In your own interest to hold the superiority of the authority in order to gain benefits from it
F) Common Power needs to be just or else corruption & injustice will lead to more conflict
G) C + F: Objectivity required in resolving conflict
F) Common Power can keep people away from conflict,disharmony or "war"

My Counter-Argument
If a "common power" is feared by the people, it will eventually lead to corruption of the power. For it to be just and objective, it needs to be transparent and thoroughly rational. Such a power wont be feared but respected and would actually solve conflicts.

The decisive argument which is employed by common sense against freedom consists in reminding us of our impotence. Far from being able to modify our situation at our whim, we seem to be unable to change ourselves. I am not “free” either to escape the lot of my class, of my nation, of my family, or even to build up my own power or my fortune or to conquer my most insignificant appetites or habits.
(Jean-Paul Sartre, Being and Nothingness)

Arguments in Support
Necessitarianism / Determinism) Actions are predestined or consequences of previous actions by self and others. Hence our state of existence is bound to be affected by external causes/entities. Free Will is an illusion.
Pragmatism) Things may be deterministic or otherwise, but in any case, its too complex a calculation to decide what to do next. Hence Free Will is a meaningless proposition.
Kant) Moral judgement needed to change state; which in turn depends upon categorical imperatives which themselves are beyond the control of Man. Hence, acts appear to be out of free will, while actually being governed by divinity / society / innate moral sense.
Locke / Hume) "... man is not permitted without censure to follow his own thoughts in the search of truth ..." - Locke; No innate thoughts or ideas - every knowledge / thought has to be acquired via experience; hence change of state is not possible without being influenced by surrounding entities.

Arguments against Sartre
Liberatianism: All actions are allowed except those that inflict or encroach upon the rights of other people (He is still allowed to perform actions inflicting upon his own rights). This limitation is required to omit the problem of contradiction and anarchy among the actions of the people. Hence, the actions of the people are not bound by any other external cause. Therefore, free will is not illusory.

Internalism: No external agent can affect the action of an individual since only he has control over his thoughts and emotions.Hence, there are no restrictions over his actions. Therefore, free will is not illusory.

Individualism/personalism: The thought or opinion of an individual is supreme. Man is selfish. Hence, he will perform those actions beneficial to him. Therefore, the external opposition against his opinion do not matter. free will is not illusory.

Anarchism: Absence of Government allows all actions, even those which inflict upon the rights of others. Govt. should be absent since laws are broken and crime takes place even in the presence of a govt. Hence, there are no restrictions whatsoever, in any form. Man is absolutely free.

Accidentalism: Opposite to indeterminism. Man has no control over some events. This is beyond the capacity of a human to perform and not, rather, any limitation to the actions of a person. Hence, no restrictions bound but some events are out of control of ANY other being. However, the man still falls under the defintion of a free person.

compatibilism: Possible to achieve free-will and be deterministic at the same time without any contradiction. Man is free to follow and move on the path that is already pre-destined. Their notion of freedom is different. Acc. to their notion, there should be no restriction. Hence, free will is not illusory.
Posted by Kedar Soni 2 comments:

2) Everyone is someone else and no one is himself.  - Martin Heidegger
Posted by chitra_adkar No comments:

6 A person’s opinion towards the theme of an artwork can be subjective. However, as far as the texture of a painting or
the confidence of strokes in an artifact is considered, the criticism can only be objective

And for this reason justice is regarded as the highest of all virtues,… and as the proverb has it, “In justice every virtue is summed up.” It is complete virtue and excellence in the fullest sense, because it is the practise of complete virtue. It is complete because he who possesses it can make use of his virtue not only by himself but also in his relations with his fellow men. - Aristotle,  Nicomachean Ethics
Posted by Kedar Soni No comments:

Political Liberty consists in the power of doing whatever does not Injure another. The exercise of the Natural Rights of every Man, has no other limits than those which are necessary to secure to every other Man the Free exercise of the same Rights; and these limits are determinable only by the Law
Thomas Paine
Posted by Kedar Soni No comments:

Chitra on Wittgenstein's meaning of Meaning and another topic

A) For a large classes of cases – though not for all – in which we employ the word “meaning” it can be defined thus: the meaning of a word is its use in the language.
(Ludwig Wittgenstein)


For a large classes of cases – though not for all – in which we employ the word “meaning” it can be defined thus: the meaning of a word is its use in the language.
Think About This-
other cases- different from meanings different from definition, thus the mentioned sense clarified.
etymology of 'word'- what does stand for, purpose of having words
consider words having anything apart from straightforward meaning, reconsider words having more than one meaning- is there similarity between those concepts
Backward Approach-
Language- define, holds what??? Again purpose of words- thus limiting the meaning of meaning as far as language is concerned.
Therefore-
what could meaning otherwise imply? or how to define a concept and ascribe words for it-analyze the process. Does 'meaning ' serve anything more than convenience or contextual definitions? examples again


B) Does science need philosophy?
Who needs philosophy? What does mean by 'need philosophy'? Define philosophy, its purpose- it is because that's the way it is or it is the way it's ought to be or it helps us understand how it is. which of these can apply to science.
How does science develop? how does philosophy develop? overlaps , interdependence and interactions- which of these?
discuss instances where philosophy had had its impact on science- from anecdotes to greek mythology to Kuhn. establish these instances to have alternate explanations
Would science perish without philosophy? obviously not!!!! [or will it]
Further suggest according to what you have to say about this question, with examples.
Avoid the customary format for this essay- DONT give your abstract before the main content of the essay  because you'll have to go for Y or N

Try to frame arguments for the following two quotes (previous IPO topics).
Will discuss them online today evening (2 May, at 5 IST) at the tinychat chat room (link on the right side bar) 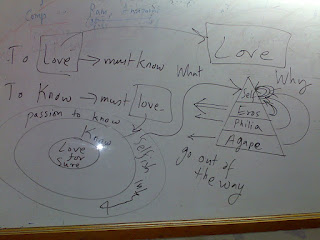 How I would Define Love
All kinds of love have a common cause, i.e. they are a form of achieving something for one-self - whether physical pleasures, mental satisfaction or spiritual peace of mind; and thus are a manifestation of loving oneself. Nishida's "Love" has two distinct meanings - First clause) Passion to know, Second clause) Considering one-self worthy of achieving and acquiring.